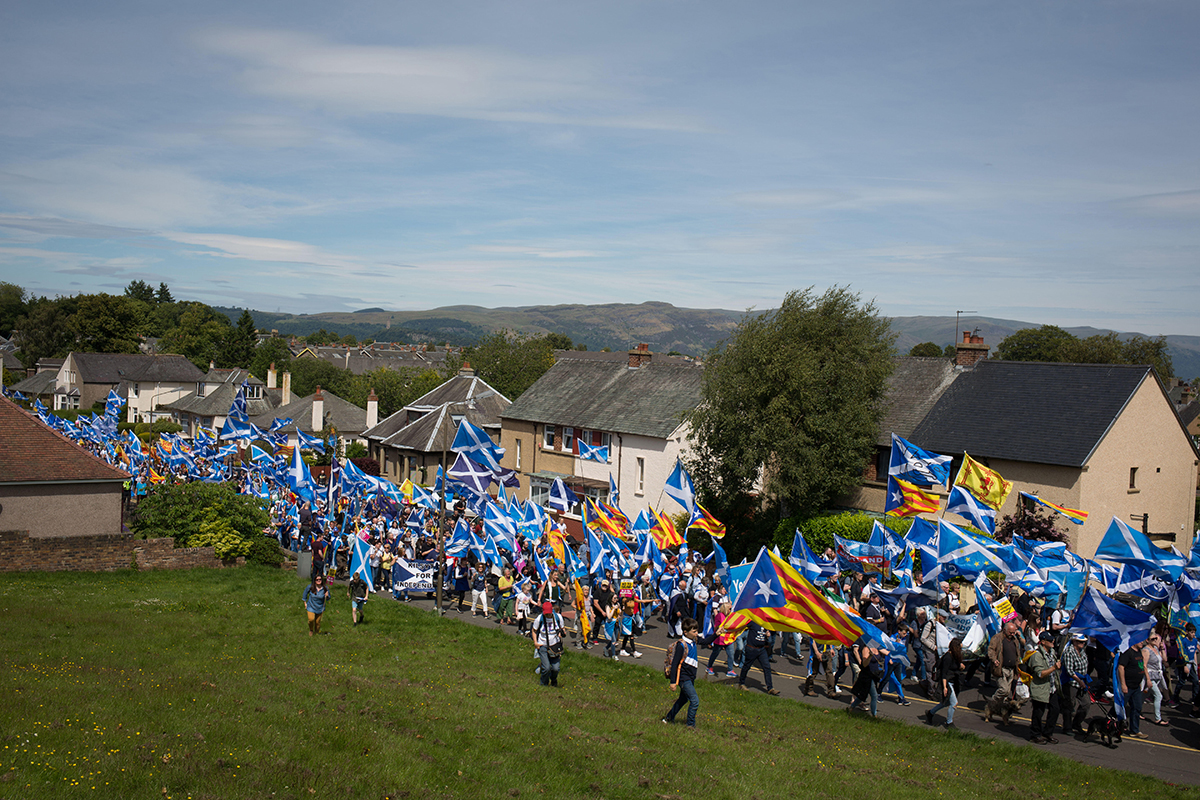 A Contested Land examines the complex relationship between Scotland’s people, history and landscape through the work of four photographers. The contrasting series of works by the collective known as Document Scotland, will be exhibited at the Martin Parr Foundation for the first time before it is shown at venues in Perth, Dunoon and Inverness during 2019.

Document Scotland was founded in 2012 by four photographers – Colin McPherson, Jeremy Sutton-Hibbert, Sophie Gerrard and Stephen McLaren. Tired of the tropes and clichés which are often used to represent Scotland, their aim is to provide an accurate view of their nation today and disseminate their work beyond the borders. Although their work is contemporary, it acknowledges the past and its resonance with the present.

They work in a Scotland where vast tracts of wilderness have been scarred by centuries of mismanagement, marine resources are controlled by five all-powerful fishing families, the wealth of the richest is 250 times that of the poorest, and the population of its major cities continues to expand, whilst population growth in many other areas is flat lining, or even falling at an unsustainable level. With impending Brexit, climate change and unforeseeable global events, it is not possible to predict where Scotland will be in a generation’s time. It is against this backdrop that Document Scotland have created A Contested Land.

Jeremy Sutton-Hibbert’s work captures the raw and powerful political theatre of Scotland’s parades and marches.Played out in public spaces from Glasgow to Faslane, depicting Pro-Scottish Independence marches to demonstrations against Trident missiles – the photographs collectively show vibrant and lively displays of stand-bearing, placards, slogans and passion. Strip away the banners and confiscate the flags, the adversaries cannot be told apart – they are all Scots. Sutton-Hibbert’s photographs offers a beguiling view of the possibility of an undivided future aside from political discourse and disagreements.

The gentle and undulating landscapes of Scotland’s peat bogs are the subject of Sophie Gerrard’s work. Eschewing sentimentality, the photographs look at how this precious environmental resource has been desecrated and denuded over generations and how these almost magical places are being revived and reinvigorated through careful and considered conservation. Once seen as ‘fair game’ for industrial-scale exploitation, this series questions the viewer’s relationship with local and national areas of outstanding beauty, and how such places fit into Scotland’s topography and consciousness, linking people to the land and the land to the people.

Stephen McLaren’s series examines the hidden link between Edinburgh’s wealth and the slave trade with Jamaica. Scotland has distanced itself from its inheritance as architects and perpetrators of the widespread exploitation of many thousands of slaves – yet behind the front doors of Edinburgh’s New Town, lies the legacy of British colonial profiteering. Depicting everyday sites across the city once connected to the slave trade, McLaren’s work ignites a conversation about acknowledging an historical wrong, and re-evaluating the relationships with people and communities within and beyond its own borders.

History is also the starting point for Colin McPherson’s visual exploration of life on Easdale, the smallest permanently-inhabited Inner Hebridean Island. Once the epicentre of Scotland’s slate quarrying industry, the island has become a by-word for repopulation and reinvention as its current community continues to battle traditional adversaries: economics and environment. At its height in the 19th century, Easdale housed four hundred people – the slates they produced roofed the world. When an epic storm decimated the island in the 1880s it went into decline, only for a new band of pioneers to resettle and revive Easdale nearly a century later. McPherson’s personal connections with the island date back thirty years, and through this series he offers a contemporary commentary on the parallels with the past and how many of the 65 current residents live.

‘At the Martin Parr Foundation, we are collecting and showing work from all over the UK and Ireland. I have been aware of the Document Scotland group for many years now and have followed their work and admire their aims and achievements. We are very pleased to have the opportunity to show their new group exhibition A Contested Land for the first time in the UK.’ Martin Parr